Perhaps the title seems a little redundant, since many people think that snakes are weird by definition. However, in keeping with the Halloween spirit, we’d like to introduce you to some of the oddest snakes out there. Like the ghouls, freaks, and grotesque haunts of this pagan holiday, some snakes have managed to make their way into the extra creepy hall of fame. Without further ado, here are our “award-winning” candidates…! 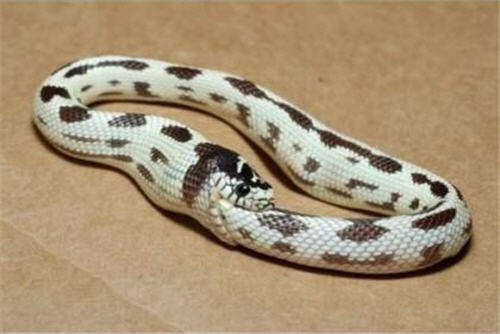 Going one step further than Hannibal the Cannibal, is our first NOM-inee, “eating himself” into our hall-of-fame. This photo has made it’s rounds to the point where I have no idea who to attribute it to, but appreciate the chance to highlight the great dilemma snakes that like to eat snakes, must face on a daily basis. If reptiles had Darwin Award winners, this little California King Snake may just take the grand prize! At least he won’t die of starvation. 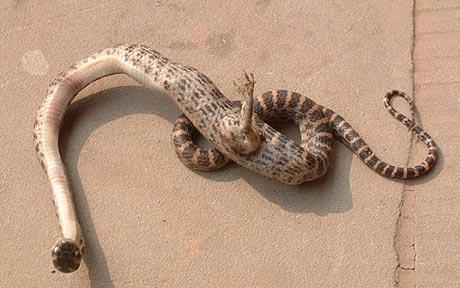 One of the most viral snake stories of 2009, was compliments of this one-legged weirdo who was discovered in a lady’s home in China during the night. She immediately killed the nightmare-ish mutant, and pickled it. Though scientists believe that snakes once roamed the earth on legs, this critter seems to have swallowed a large lizard that subsequently ruptured through the side of the snake, making it look like the handy-work of the infamous Dr. Frankenstein.

The better to bite you with!!! 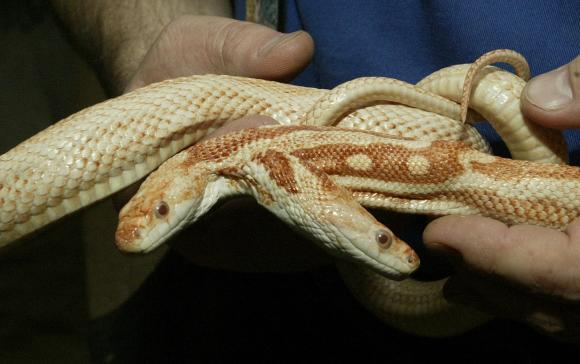 This two-headed albino Rat snake named We, was born at the World Aquarium in 2006. Though this conjoined mutation is not incredibly rare, it is rare for the twins to live to adulthood.

What’s scarier that a scaly reptile??? 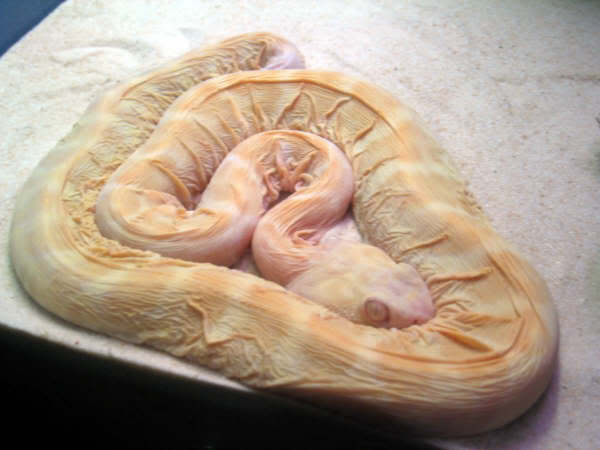 For those of you who think that scaly animals are creepy, I would like to introduce you to exhibit A. Only when I see this scaleless rattlesnake from the Barcelona zoo, do I come to the realization that reptiles are much less frightening with scales, than without! These scaleless mutants are the by-product of man-kinds attempt to selectively inbreed certain genetic traits, to the point, that (genetically speaking), all heck breaks loose. To each his own, but I am personally not a fan of these inbred freaks!

Is there something on my Face?

This naturally occurring “weirdo” is found in the waters of Southeast Asia. While the Tentacled Snake is a known oddball, the functionality (if any) of its tentacles seems to be debatable. It’s an ambush predator feeding on small live fish, which means that your odds of coming across one of them in a dark alley on Halloween night, are very slim.

Honey, where did you leave the iron?

Another homely aquatic species is the Elephant Trunk Snake. These wrinkly, saggy Shar peis of the snake kingdom, reminiscent of the scaleless rattler above, are nature’s poster-children for plastic surgery. That’s a face that even a mummy couldn’t love. 🙂

I’ve got no strings to hold me down…. 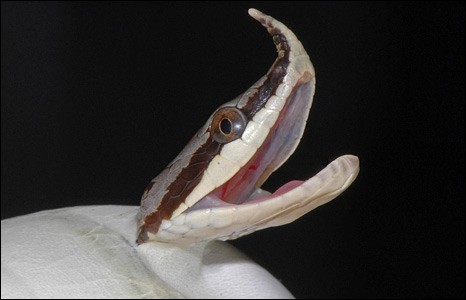 Pinnocchio may not be a fearsome Halloween character, but this freshly hatched Rhino Ratsnake, born in London Zoo, certainly makes for an odd, if not funny looking snake. Perhaps it gives them character, and I do think they are kind of cute, but I feel they deserve a spot in our Halloween Spook alley!

Here comes the clown… of your nightmares!

The wildly colored, morbidly obese Rhinoceros Viper might look like look the part of the bulbous-nosed, big shoed comedian, but packing some of the longest fangs in the snake world, sporting those sinister twin horns on its nose, and carry a devastatingly venomous bite, you wouldn’t want to hire him to entertain at your kids birthday party! This clown is more along the lines of a Stephen King thriller!

Does this branch make my nose look big?

I “Wiki’d” (Get it? “wicked”) this critter, and though it is similar to the aforementioned Rhino Ratsnake, this male Madagascar Leaf-nosed snake seems just a tad freakier. Who needs a costume when you look like this naturally? As a tree dwelling snake, this odd appendage makes for good camouflage from the prey animals it hunts. 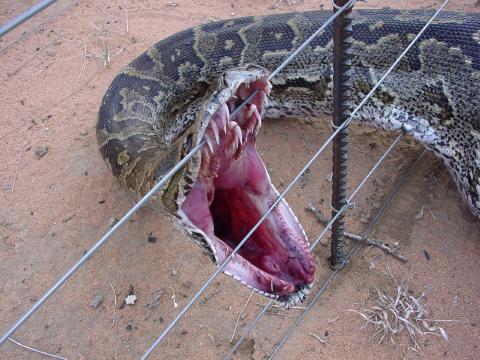 This photo is compliments of yet another fear inducing viral email with so many sources, that it is impossible to track down the photographer. This African Rock Python, which found its way into an electric fence shows that you don;t have to be venomous, to put a good scare into trick-or-treaters! I think I’d rather take candy from strangers, thank you very much!

Welcome to the real freakshow! 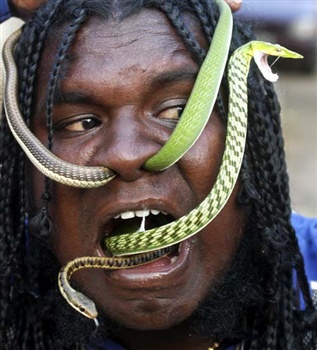 At this time, we at Snake Buddies, would like to remind everyone, that no matter what natural oddity may be discovered in the wild, the grand-prize for the freakiest side-show attractions in the world, will never fall to any animal other than humans. Every animal fills an important niche within our ecosystem, and though many snakes have evolved to acquire odd physical appearances, they are masters of their habitat.

We hope that you all have a very fun and safe Halloween!

Leave a Reply to Becky the animal lover! Cancel reply