You all know that I love snakes, and if you’ve read more than one of my posts, you likely realize that venomous snakes are my passion.

As much as I love snakes, however, there are some animals that completely creep me out! I have a theory that the more legs an animal has, the creepier it is. Snakes are great, humans and birds are tolerable, four-leggers are decent enough, but after that things start getting more uncomfortable. Insects are a mixed bag for me, but spiders and scorpions give me the willies. At the top of the creepy ladder, are the centipedes. Their flesh piercing, chitonous legs, their formidable venomous fangs, and the grotesque fleshy membrane, visible between their protective plating makes my skin crawl. The thought of one of those nasties crawling up a pant leg is what nightmares are made of! Just writing about them makes me want to take a scalding shower in a mixture of Clorox and Raid.

Perhaps my literary description fails to impress upon you readers how genuinely “yucky” centipedes are. Maybe a photographic account will help shed some much needed light on the insidious qualities of these nefarious demons….

It was shortly after midnight, as we drove down a deserted road, deep in the Sonoran Desert of Southern Arizona. The previous day’s 16 hour drive, followed by a grueling hike, had left me exhausted and wary. Trying to stay awake, I scanned the surface of the paved road in the dim headlights ahead, hoping to see the familiar serpentine shape that brought me so close to the Mexican border. My hands were slightly shaking from the copious amount of Mountain Dew I had ingested to help keep me conscious for the last 40 plus hours, when all of a sudden, I saw a flash of light reflect off a shiny snakish body moving quickly off the road. Shaun slammed on his brakes and I jumped out of the car, flashlight in hand, as he rolled to a stop. We’d passed the yet unidentified critter by about 20 yards, so I ran back quickly – followed by Shaun, scanning the warm blacktop with my light for our slithery target. I saw quick movement out of the corner of my eye, as the beam of my light bounced over the fleeing fugitive. As we approached the animal, our heavy footsteps caused it to stop. My excitement quickly turned to morbid curiosity, and I broke out in a cold sweat when I looked down and discovered that our “snake” was actually a Giant Desert Centipede!

Wanting to document my find, and illustrate how large these things are, I told Shaun to put his hand down next to the bug for scale, while I took a photo. It was pitch black, so I used my flashlight to make sure I was centered on the centipede, then turned it off and snapped the picture. Right as the camera made its audible click, I heard a rapid flutter and stepped back, thinking the centipede was on the run. I quickly turned on my flashlight and this is what I saw. 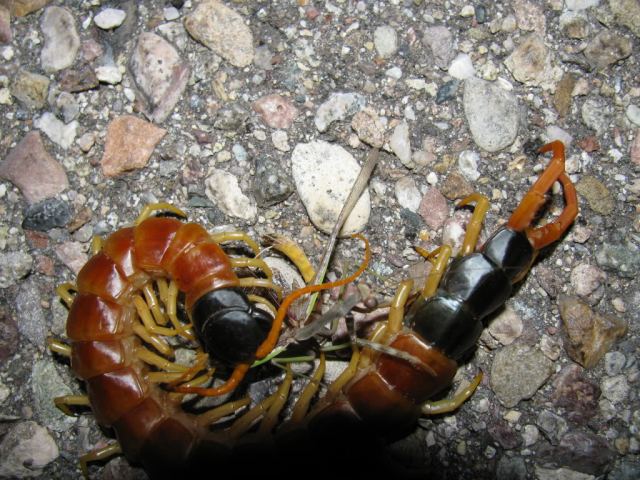 Mantids are one of the bugs that I do find fascinating, and anyone who has studied them much, knows that they are formidable hunters, making quick work of their prey. I’ve see them take down large spiders, bees, and even a skink! This knowledge made this scene all the more unnerving, considering the centipede took all of one second to catch, overpower, and start consuming one of the greatest hunters in the insect world!

It wasn’t until we were in the car again, going through my photos, when I scrolled back and saw the original image I captured that night….

Not only does the image detail Shaun’s fantastically manicured nails, it also shows the Mantis in mid air just a split second prior to its death!

As it turns out, this was the smallest of the centipedes we spotted during our trip, being less than half as long as the biggest. In case you are not creeped out enough yet, here is one more picture of a larger specimen on Shaun’s boot.

It may not look it, but this one was nearly twice as long as the one in the other photo!

So why all the talk of centipedes in a snake blog, you ask??? Well, as it turns out, despite decades of snake-related research in books, on line, and talking with other snake enthusiasts, my attention was recently directed to a type of venomous snake I had never seen, or even heard of before in all my life. What’s more, is that this species appears to have evolved in such a way, as to have a strange similarity to centipedes. If you were to ask me what I would get if I crossed a venomous snake with a centipede, I don’t think, in my wildest imagination, that I could have come up with anything close to what mother nature has created.

So what’s so special about this serpent? It’s not an overly attractive species. It almost looks to be covered in moss. What makes this snake different, is better seen in the following photo: 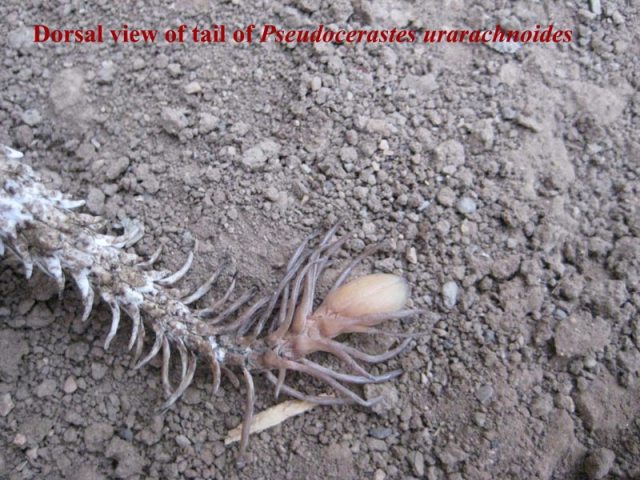 That’s right! This unique snake has mastered the art of mimicing a centipede with its tail. This snake is one of a handful of species in the world, that uses a caudal lure to attract prey. A caudal lure, is a tail that looks like a potential prey item to other animals, and is moved in such a way as to mimic a worm or bug, in hopes of attracting the hungry predator close enough, that the snake can bite, envenomate, and consume it.

To be fair (or at least make me feel better), this species, found in a small corner of Iran, was only described within the last 7 years or so, and only recently was given a common name – the Spider-tailed Adder. If you google this snake, you will find that all links point back to just one or two existing (yet very short) papers or photos of the animal.

As if the photo isn’t convincing enough, check out this short video!

I can’t imagine what on this earth would choose to make its living, consuming live centipedes, but I can only imagine its surprise when it jumps on this lure, thinking it will get a tasty snack, only to be ambushed by a much larger predator equipped with long fangs and potent venom.

Odd, rare and unusual animals make it easy to identify and appreciate Mother Nature’s hand in the evolution of them, but hopefully also help us understand that every animal on this planet is unique and fills an important niche in our ecosystem. Here’s hoping you came to this site and learned something completely new or unexpected. It’s exciting to wonder what new oddity in our animal kingdom might be discovered next. I definitely look forward to it!